This is the 6th book in the Jacob Asch detective series and it sits neatly in the hardboiled genre following the work of an old-school PI who shares hints of cynicism and moments of good humor. 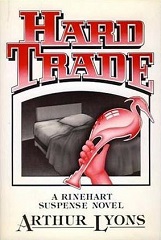 Los Angeles detective Jacob Asch investigates an ordinary domestic case that becomes complicated with multiple murder against the backdrop of the California lifestyle.

It begins when a troubled woman comes to Asch with a commonplace domestic case - she needs to know the truth about the man she is about to marry and hires Asch to surveil him. When Asch discovers the man to be homosexual, and the woman is run down and killed on her way to a hastily called meeting with Asch, it becomes clear that much more is at stake.

The complexities and big-money schemes of Los Angeles real estate development are at the heart of the picture - with extensions into the tawdry “chickenhawk” world of Sunset Boulevarde gays and deep into the California political arena, reaching ultimately to the state capital in Sacramento.

When Asch is framed for the murder of a Hollywood art dealer, he finds his career at stake and himself at the center of a large political scandal.

The plot moves swiftly through a chain of revelations and scenes, but far more than surface solutions are at play in this consistently gripping novel of detection and intrigue.

Jacob Asch is a Los Angeles-based private investigator who was previously a reporter who had been sent to jail after refusing to reveal a source.

He is the type of PI who gets the job done through dogged determination and a complete unwillingness to give up.

But he has a keen and witty delivery, as can be seen by the terse description of the woman who has hired him for a surveillance job:

“Marlowe and Spade could keep the breathless blondes, I thought. They were nothing but trouble anyway. I’d take the Munchkins any day. There were no legs to get distracted by and I didn’t have to wait for the check to clear.”

In a nasty turn of events, the woman who hires him to do the surveillance job is killed right in front of him. This comes hard on the heels of him finding out that the prospective fiance was in a gay relationship.

What soon becomes apparent is the woman was using Asch to dig up some dirt on the man. It prompts him to continue to follow what would have been the case and uncover what appears to be some dodgy dealing in a real-estate development deal.

As ever happens when a determined detective starts kicking over rocks, the lowlifes start slithering out and this makes things dangerous for Asch. When it all becomes political it also all becomes life-threatening.

This is a well-paced detective story that methodically unpicks the lies and deceits of a rich and powerful collection of men. Asch tends to walk into dangerous situations, sometimes without planning too far ahead and the results can be all too predictable.

Fans of old-style hardboiled detective stories will enjoy the way in which Asch works his way through this case. Deceptive when he needs to winkle out information and balls to the wall when he needs to take action, he is a PI to be admired.

Hard Trade is a rewarding detective novel that rewards the reader with a well woven and intriguing story.