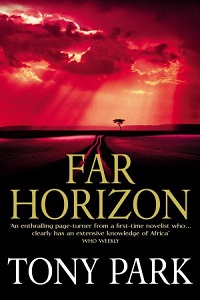 Former Australian army officer Mike Williams is trying to forget a troubled past - with a carefree existence as an overland tour guide in Africa. But then one day on the road, he receives word that the South African Police have some news for him.

A bloody and tragic run-in with ivory hunters in Mozambique the year before had left Mike's world in shreds. But now the authorities are on the poachers' trail and they need his help to catch them.

Tenancious English journalist Sarah Thatcher is along for the ride, and insists on becoming involved. Mike must choose between his duty to keep the tourists in his care safe and his hunger for retribution.

The murderous hunters and the innocent travellers are on a parallel journey through Africa's most spectacular locations. Eventually their paths will cross and Mike will have his shot at revenge...but at what cost?

Far Horizon is the first thriller by Tony Park and is set on the magical continent of Africa. At least, thanks to Park's evocative descriptions of the landscape and the wildlife, the beauty and magic of the place is brought to life.

Mike Williams is a safari guide working in South Africa taking groups of tourists on overland tours through the Kruger National Park and beyond to Zimbabwe and Zambia. He used to be a major in the Australian army and had fallen in love with Africa while serving with the UN forces where his job had been part of the team who identified and disarmed unexploded landmines in Mozambique.

His life was changed completely when he and his colleague and best friend get caught in the crossfire from poachers, illegally hunting a bull elephant. When the dust settles from the incident Mike leaves Africa to return to Australia, quits the army to return to Africa vowing revenge on the killers.

Twelve months after the incident in Mozambique while taking a tour group on a safari Mike receives the call from the police that he has been waiting for. Their intelligence tells them that the men suspected of the atrocities in Mozambique have returned to Africa and will be hunting in the same area in which Mike will be travelling. According to the police, they don't have the evidence needed to detain the men, but if Mike was able to find out anything they would be very appreciative.

Taking a group of tourists on a potential collision course with ruthless killers is far from acceptable behaviour, but Mike is far from thinking rationally and is blinded by the revenge that he craves. He heads straight for a showdown.

It so happens that one of the members of the safari is Sarah Thatcher, a British journalist working for a travel magazine. Sarah is far from happy in her job, believing her journalistic talents will one day earn her a job writing for a more high profile newspaper. She has a good nose for a story and right from the moment Mike takes the call from the police she senses that Mike has an ulterior motive on this trip. Their relationship starts out very rockily but, through all kinds of adversity, they develop a strong friendship that will serve them well later in their adventures.

Unfortunately for Mike and the rest of the unsuspecting tour group, the men they have chosen to come up against are used to operating outside the law and have killed to keep their secrets secure. They're not about to let a bunch of backpackers get in the way of one of their biggest paydays ever.

Thanks to the author's obvious love for the wonders that Africa holds, the story is set in an almost otherworldly place that simply begs you to admire and appreciate. The wildlife and the beautiful land in which they live is described in such rich depth of detail that it is easy to let oneself get swept away by it all.

All the easier to despise the poachers who dare to defile such a profound place.

There is an inevitability about where the story is headed after the revenge motivation is established in the opening scenes. There is going to be a showdown, of that there can be no doubt, it's just a question of when the opportunity will arise for the poachers and the tourists to come head to head and then what the fallout will be when the dust settles. In the meantime you get to sit back and appreciate the wonders hidden within the borders of south-eastern Africa.

While trying to focus on the larger picture which consumes the plot, Park also manages to cut to the more emotional, personal turmoil that , firstly, Mike Williams must battle through and then later, the tough decisions that Sarah Thatcher must make. He does so in a rather pragmatic way, although not unsympathetically and completely in keeping with the personalities of the characters involved. The only time that I felt there was a slight misstep was in a couple of personal exchanges that came across as seeming a little forced, but this was barely noticeable thanks to the sleekly flowing plot that drives the story on.

Mike Williams is a very interesting character with a complex past and a vast range of emotions surging through him. He's the kind of everyman hero with whom it is very easy to identify, making the kind of mistakes that you can see yourself making if put in a similar situation, scraping by with a heady combination of good luck and reasonable management.

Far Horizon is the kind of book that allows you to become completely wrapped up in the moment, coaxing you in to imagine yourself visiting the places described and Tony Park has done a wonderful job making the most of his compelling debut. Then, just when you get completely comfortable, you're hit with the more confronting, dangerous and downright dirty aspects of the book. Make no mistake this is a solid thriller complete with a couple of the most reprehensible men you could ever dislike. The cry of "more please" entered my mind as I closed the book on the last page.