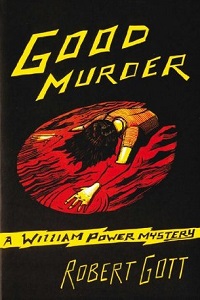 It's 1942 and war is raging in Europe and in the Pacific. The Japanese army is on Australia's doorstep, and the small coastal Queensland town of Maryborough is on full war footing. What they are not prepared for is the arrival in the town of a troupe of incompetent actors whose unjustifiably self-confident leader, William Power, is determined to bring his daring production of Titus Andronicus to the barbarians of rural Australia.

Unfortunately for the Power Players, the only gift William Power has is a capacity for being in the wrong place at the wrong time. When a young woman goes missing and is found floating dead in the town's water supply, Power becomes the prime suspect in her murder. With every misplaced step he takes, he becomes more and more embroiled in a series of crimes which baffle the police and horrify the locals.

Having no confidence in the constabulary, Power decides that his only option is to solve the crime himself. His acting skills are not good; his detection skills are worse. As he stumbles towards a solution and as his injuries mount up, he never wavers in his belief that he alone can bring the killer to justice. But, with every day that passes, he tightens the noose around his own neck until, on the night of a violent storm, everything changes. And not for the better.

It's 1942 and the William Power Players have arrived in the small Queensland town of Maryborough where they plan to put on a production of Titus Andronicus. The William Power Players is a troupe of 8 with limited acting abilities and a variety of physical conditions that have prevented them from joining up to go to war. What these thespian wannabes lack in ability, they more than make up for with their belief in their ability and also their antagonism towards one another. Their disdain is even more obvious when it comes to their leader. But the poor regard by which his players hold him is soon to become the least of William Powers' problems.

In the short time that he is in town, William befriends a young local woman and accompanies her to the movies before seeing her home to her (slightly crazy) mother. After a bizarre evening in which he was screeched at by the mother and then witnessed an alarming fight between the young woman and her brother - a brawl, actually - he calls it a night and heads back to his hotel. The next time he sees the woman, her body is being recovered from a water tank after she was missing for a number of days. The obvious suspect is the new guy in town who was the last person seen with her, William Power.

Things would probably not have been so bad for Power if he didn't insist on trying to solve the murder himself. It's one thing to be accused of murder and be forced to proclaim your innocence convincingly, it's a totally different kettle of fish to race around a strange town in an effort to dig up evidence to prove someone else guilty in a bid to clear your name. Yet, in a completely bumbling sort of way, this is what Power decides to do. It seems that no matter what move he decides to make he always manages to dig himself a little deeper into trouble. So when the first murder is followed by more deaths, the prime suspect is always going to be the stranger new in town and already a suspect in the first murder.

Adding more problems to William's mounting worries is the organization, rehearsal and promotion of the performance of Titus Andronicus. It becomes apparent that William Power is not the all-commanding thespian he would have people believe and, with his attention being taken by the events in town, he has all but lost what little respect he had from his fellow players.

Good Murder is a lively murder mystery that captures a terrific sense of the mood of the era in which it is set very convincingly. Told from the first person perspective of William Power, we are made to feel most sympathetic to his plight and you really get the impression that he is a with-it, calm individual who is able to survive any kind of adversity with cool aplomb. But the rest of the Maryborough locals and his fellow actors all see him as a jumped up selfish ponce.

Robert Gott constructs a neat murder and then effortlessly slots together a cunningly devised situation that points to only one man who must be the murderer. But surely it can't be. As annoyingly pedantic as he is, as annoyingly self-serving as he comes across, as stubbornly pig-headed to the point of stupidity as he seems, surely William Power, the small time actor with flat feet can't be the killer. Can he?

Full of growing disbelief and righteous outrage, Power works with increasing despair to clear his name with the tone of the story frequently crossing from desperately serious to quietly humorous. But as funny as we the readers find it, you can tell that the outrage and determination factor is climbing and so are the chances that things are going to get worse for Power before they get better.

This is a very entertaining murder mystery with the distinguishing feature of being set in rural Australia during the Second World War. An unusual cast supporting characters (as can often be found in small Australian towns) provide some amusing diversions, but it's William Power who steals the show. It just remains to be seen weather the show in question is Titus Andronicus.