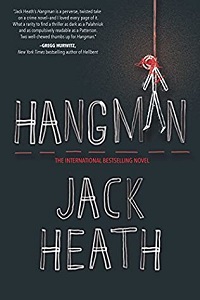 A 14-year-old boy vanishes on his way home from school. His frantic mother receives a disturbing ransom call. It's only hours before the deadline, and the police have no leads.

But this time Blake might have met his match. The kidnapper is more cunning and ruthless than anyone he's faced before. And Blake has been assigned a new partner, a woman linked to the past he's so desperate to forget.

Timothy Blake has a secret, one so dark he will do anything to keep it hidden.

And he also has a price. Every time he saves a life, he takes one...

There is a very distinctive point of difference that is going to cause some readers real problems when tackling Hangman. The squeamish should avoid at all costs, those with a higher tolerance for the garish will appreciate the exceptional investigative talents of Timothy Blake and overlook his cannibalism.

Timothy Blake acts as a consultant to the FBI who uses his help on difficult cases. His powers of observation and recall and his ability to put himself in the mind of the criminal are virtually unparalleled.

The case that holds our attention to begin with is the kidnapping of a 14-year-old boy. Blake enters the scene after the FBI have been through and manages to unearth enough scraps to give the mother real hop of seeing her son alive again.

Of course, first appearances, just like Blake himself, can be deceiving and there are significant unexpected twists in store. So much so that the case becomes a puzzle that is up there with some of the most difficult he has had to solve.

Joining Blake is his assigned partner from the FBI, Reece Thistle. She is clearly put in place to watch him as much as to assist him. (After all, the Special Agent in Charge who was instrumental in bringing Blake on board with the FBI knows all about his predilections). Blake’s not happy she’s overseeing him, she’s not happy he’s involved in the case. Your typical oil and water pairing.

Hangman will polarise opinion due to the horrifyingly graphic nature of Blake’s eating disorder. He is an anti-hero of the highest order. You admire him for his investigative skills but loathe him for his one-track mind when it comes to human flesh.

One thing is for sure, as a reader you don’t have time to get bored. The pacing is frenetic as Blake and Thistle slice through layer after layer of misdirection to get closer to the heart of the case.

Through a series of flashback sequences we learn how it was that Blake eventually turned to cannibalism. We are taken through the traumas of his early life in which he was orphaned and then later abused. It gives us a greater understanding of his mind and the way in which he has developed his particular set of coping mechanisms.

Although you get a greater understanding about him, I for one am still seriously on the fence about him.

As a well-constructed thriller with plenty of unexpected twists Hangman delivers. As a crime novel where the main character is not your run of the mill tortured soul, it is off the charts. As a story that will appeal to the majority of crime readers…not so much.

Yes it’s confronting, yes it’s gory, yes I regret reading it during my lunch breaks…but Hangman is also a riveting mystery thriller that urged me to keep reading.