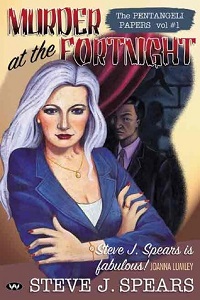 The story explores the themes of winning, losing, and recovering fame and the relevance of traditional theater in the 21st century. The dialogue is snappy, the characters outrageous, and the story suspenseful. The cast of characters includes debauched stars, sleazy execs, brain-fried actors, and drunken playwrights.

Murder At the Fortnight is the first book in the series titled The Pentangeli Papers. Steve J. Spears has written a darkly humorous book that introduces Stella Pentangeli, a showbiz detective with a fondness for Beefeater gin and armed with a quick wit and a tongue that produces a steady stream of classic one-liners.
Stella always wanted to be an actress and did everything necessary to realise her dream, acting lessons, elocution classes, dance lessons, you name it. There was just one thing standing in her way: she couldn't act to save herself.

Not one to let minor inconveniences get her down, Stella moved on to the next best thing and now produces an on-line zine called The Pentangeli Papers in which she reviews all things showbizzy. It's while attending a production of The Rocky Horror Show for her online zine, and after the Coke machine fell onto and killed the show's lead, that she discovers she has a bit of a flair for detective work. It's her invaluable deductions when talking to Inspector Ng of the homicide squad that breaks the case - a new career is born.

While attending a theatrical workshop known as The Playwright's Fortnight, an event the organizers place many dreams of grandeur on the world stage but in reality is a woefully boring experience, the murder given away by the book's title takes place. Stella, newly self-crowned as a detective is on the spot to share her expertise.

She renews her acquaintance with Investigator Ng who has been assigned the case. Ng is a man who gives very little away both in facial and verbal expression, but who seems to miss nothing. In fact, I'd say he's a whisker away from the cliched inscrutable Chinese detective. He is happy to take Stella into his confidence once he realizes her obvious talent for solving puzzles.

To give the scene at the new hotbed of theatre added oomph, Spears has filled it with an assortment of egotistical wannabe actors, singers and hangers-on providing an endless parade of amusing moments to sidetrack the investigation, not to mention possible suspects. But one murder is never enough when you have a captive audience, so to get things really jumping and the nerves really jangling another murder takes place. Ng and Stella are galvanized into action, Ng through professionalism, Stella through fear.

Murder At the Fortnight is a terrifically entertaining murder mystery taking potshots at the fickle theatrical scene. He has populated the story with an amazing array of characters, each of them scene stealers in their own right and all contributing to the off-beat feeling that pervades it. For instance, there's Robbie George, a brilliant playwright who loses his muse when released from prison, then there's Nelson J. Sharp a once gifted actor with a substance abuse problem who now receives messages from YHWH - messages such as the one telling him that he has Work to do at The Fortnight. An unexpected pleasure, too, is Investigator Ng who reveals a sharply witty personality that becomes deeply endearing.

It all adds up to a fast-paced story rich in black humour and is a very promising start to the series. Spears uses the punchy fast pacing to accentuate the humorous moments hitting you with one surreal moment after the other. A slight warning, though, these humorous moments are punctuated with some graphic violence rather reminiscent of Elmore Leonard or James W. Hall.

The only aspect in which the story is a little light on is the handling of the revelation of whodunit. After a good build up it all ends in an almighty rush and then, no sooner do we find out who the murderer is than we're ripping through a slightly anti-climactic confrontation and capture. Because the focus is more on the establishment of the main characters in the series and their future roles in the series, I didn't really have a problem with this, but it did feel a little flat to me.

I thought Murder At the Fortnight was an excellent first book of a series, telling us just enough about the characters to make them sound interesting while also ensuring that we want to find out more. Dark humour isn't for everyone and the book is also tinged with some graphic scenes so it won't be to everyone's taste but it's a series that I will be revisiting.