It’s the early 1980s: the heady days of excess, dirty secrets and personal favours. Former detective Frank Swann is still in disgrace, working as a low-rent PI. But when he’s offered a security job by the premier’s fixer, it soon becomes clear that someone is bugging the premier’s phone – and it may cost Swann more than his job to find out why.

Old Scores is the 3rd book in the Frank Swann series following on from Zero At the Bone. We have moved forward into the 1980s in this entry and the seamy lowlifes who gave Swann so much trouble in the earlier books are still out there and still giving him trouble.

Swann, the disgraced former police superintendent and now PI has picked up a job working as a security consultant and “fixer” for the new WA Premier. It’s a role that comes with a bunch of added tasks that once again puts him head to head with his nemesis in the police force, the corrupt Ben Hogan.

Apart from checking the Premier’s office for bugs, dealing with the Premier’s increasingly erratic father, placating local mobsters and mediating a potentially escalating bikie war, Swann is tasked to check through the tender offers for work at the proposed Burswood development.

A big construction project means big money is involved and this attracts every shonky company in the state. In this, Whish-Wilson does a nice job of mixing fact with fiction. Swann has to look for any red flags among the various tenders. And this is where things become very interesting and very dangerous.

Added to the mix are a couple of wild cards in the form of Blake Tracker, a young aboriginal kid who has broken out of juvenile detention and Des Foley, a bank robber known as the Good Morning Bandit who is wanted nationwide. They’ve both headed to Perth and will inevitably cross paths with Swann.

Once again, the period in which the story is set has been accurately portrayed. Perth in the early 1980s has become a land of opportunity, riding on the back of the mining boom. That has led to a robust criminal element, not least of which is part of the police force.

The task for Swann is to pick his way through every violent roadblock that is thrown his way. Money, corruption, vice and murder are all unearthed by his inquiries.
The story moves quickly as Swann makes some sort of progress on his case. The pasts of Blake and Des are uncovered and prove to be vital to pulling together the pieces he can’t make fit.

Old Scores does a good job of tying together the events that took place in the previous two books. Having said that, it is not necessary to have read Out of Sight or Zero At the Bone to appreciate the characters and their respective interwoven pasts.

The gritty, raw and energetic style with which David Whish-Wilson provides us with a fast-paced peek into something very akin to how WA Inc. must have played out at the time. He has wrapped it into a noir story about grift and corruption that is just what I look for in a hardboiled crime novel.

Previous Book in the Series 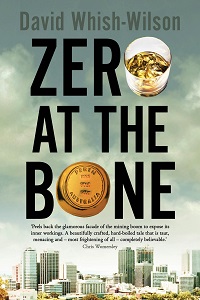