When John Denson is hired by a faltering newspaper to uncover the "Harry" (a reporter using inside information for extortion) on its staff, he discovers that blackmail is only a small part of a labyrinthine scheme of international corruption and brutal murder.

Soft-boiled Seattle sleuth John Denson, first introduced in Decoys, is hot on the trail of crime once again in this second Denson mystery.

30 for a Harry takes its inspiration from a bit of newspaper lore – the legend of Harry Karafin, who after three decades on The Philadelphia Inquirer was exposed as having used his position as an investigative reporter to blackmail businessmen.

Drawing from his own background as a former intelligence agent and newspaper reporter, Richard Hoyt sends Detective Denson undercover at the Seattle Star to search for the papers own “harry”. In his search, Denson confronts the dark underside of the newspaper world, where the honoured traditions of truth and fairness are destroyed by greed and the quest for power.

Filled with unexpected plot twists and offbeat characters, here is a first-rate detective yarn that will keep you guessing until the final pages.

A tough, lusty journey through the world of newspapers, city politics, sex shops and blackmail, 30 for a Harry should further advance Hoyt’s growing reputation as one of the fastest and funniest mystery writers of the eighties. 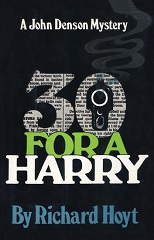 This is the second book in the John Denson series following on from the first book, Decoys and earned author Richard Hoyt a Shamus Award nomination for the 1982 Best PI Novel.

Denson is a Seattle-based private investigator who was a former newspaper journalist and it is this background that has earned him this case.
First a quick explanation of the meaning of the title of the book. The story follows an investigation into set at a newspaper. When submitting their stories, reporters signify that the piece is concluded by placing a ‘30’ as an indicator. A Harry is a reporter who accepts money from people and businesses in return for not publishing stories that might cause reputational damage. It is a practice that this most certainly frowned upon.

In this case the Seattle Star’s top reporter Wes Haggart is suspected of being a Harry.

There is a breeziness to the way Denson operates that can be a little misleading if you’re not careful.

Reviews From Other Sites

“Having worked for a newspaper at one time himself, private eye John Denson is a natural to be hired by the Seattle Star to help flush out a Harry, vernacular for a crooked reporter with a habit of shaking down local business establishments.” - Read Full Review

The View From the Blue House

“John Denson is a former journalist turned PI. He’s hired to work on the Seattle Star by the paper’s owner and editor, both of whom hold a suspicion that a ‘Harry’ is on the newspaper’s staff – named after the famed Harry Karafin, the Philadelphia Inquirer investigative journalist who used his position as a reporter to blackmail influential businessmen to keep stories out of the news…” - Read Full Review 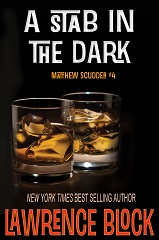