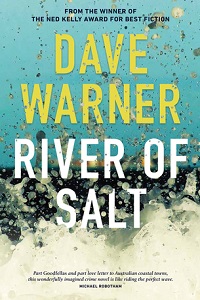 1961, Philadelphia. After having to give up his brother to save his own life, hitman Blake Saunders flees the Mob and seeks refuge on the other side of the world. Two years later he has been reborn in a tiny coastal Australian town. The ghosts of the past still haunt him, but otherwise Coral Shoals is paradise. Blake surfs, and plays guitar in his own bar, the Surf Shack.

But then the body of a young woman is found at a local motel, and evidence links her to the Surf Shack. When Blake’s friend is arrested, and the local sergeant doesn’t want to know, it becomes clear to Blake – who knows a thing or two about murder – that the only way to protect his paradise is to find the killer.

The story begins in Philadelphia in 1961 as we witness a gangland hit. It is carried out with brutal efficiency by Blake Saunders, a good-looking clean cut young man who is very good at what he does.

The problem for Blake is that his older brother, Jimmy gets himself involved in a scam that essentially steals from his (and Blake’s) bosses. The end result is Jimmy is to be taken out and Blake’s life is also in danger.

His flight takes him all the way to Coral Shoals on the New South Wales coast where he eventually becomes the owner of the Surf Shack, a bar where he lives a quiet life that allows him to indulge his passion for surfing and surf music.

The quiet pace suits him nicely and his escape to the water allows him to unwind and feel at peace with the world.

“As usual when things niggled at him, the water changed everything. This is life, infinity, God, he thought as he let the power of the ocean lift him up and propel him. He felt good again, cleansed by the river of salt.”

The first is the appearance of a couple of standover merchants who suggest it would be in Blake’s best interests that he “take out accident insurance”.

His insistence that he didn’t need insurance did little to turn the men off. He knew they would return.

The other was the murder of a woman in a motel room in a nearby town. On the night that she died she had been at the Surf Shack and had gone home with someone after meeting them in the carpark.

The law in the small town comes in the form of Sergeant Les Nalder who tends to see it as his own private kingdom. He is loath to take action against the extortionists when Blake tells him about them for fear of bringing the attention of the higher-ups in the department.

“If he did anything official, there would have to be a report. Powers-that-be would read it. One of them might even realise that Coral Shoals existed. If any policeman more senior than him got posted here, bang went the gravy train.”

Of course, the murder investigation throws a different slant on things but Nalder quickly defers to the homicide detectives investigating the case. Again, his primary aim is to maintain his position in his community rather than do any real police work.

In order to protect his anonymity, the lifestyle he had come to treasure and the people close to him who he regarded as valuable friends, Blake feels compelled to do some investigating of his own. Reluctantly, Nalder gives him his blessing to do some digging.

What soon becomes apparent is that the person he once was is not really all that far from the surface. When he’s pushed too far he discovers he still has the same capabilities that made him successful at what he did in Philly.

River of Salt is another solid Australian noir crime story that twists unpredictably through numerous crises. The plot is tight and the characters and their respective relationships with one another are well rounded. We get to know what makes each of them tick, their interests, their fears and, most importantly, their motivations.

The weaving of the music into the story is important. It is achieved with subtlety and it helps to set the mood without beating you over the head with it. It’s the era of the surf-themed guitar dominant bands whose music transports the listener onto the next curling wave.

Oh yeah, for a more immersive experience of the book Dave has recorded the song “No Good Can Come From This” which Blake was practicing early on at the Surf Shack. It is definitely worth a look and a listen on YouTube.

'This is Australian crime writing at its apex – a seemingly simple case that becomes ever more convoluted as the narrative progresses, widening to encompass protection rackets, early pornographic films, racism, and country-club politics. That it takes place against the backdrop of a burgeoning 1960s counterculture is refreshing as a sea breeze. Let’s hope River of Salt signals the beginning of a new Warner series.'