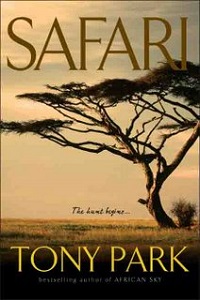 A volatile Zimbabwe and the jungles of the Democratic Republic of Congo are the battlefields for a dangerously charged game of cat and mouse in Africa's wildlife wars.

Canadian researcher Michelle Parker jumps at the chance to visit the famed mountain gorillas, but she is wary of the man giving her this opportunity - professional big-game hunter Fletcher Reynolds.

Fletcher represents all Michelle has fought against - the slaughter of animals for material gain - but she finds herself increasingly drawn to his power and is reassured by his apparent support for the stamping out of poaching.

Into this mix steps ex-SAS officer Shane Castle. He has been recruited by Fletcher to spearhead the anti-poaching campaign. Shane is a man who has seen what bullets can do - to both humans and animal - but is also a man who makes Michelle start to doubt the choices she has made.

The mystery, the majesty, the beauty and the danger of Africa all feature prominently in Tony Park's novels and once again, in Safari, his 4th , he combines the wonders of the untamed wilds of the continent with a solidly crafted thriller. Safari is set initially in Zimbabwe before moving on to the Democratic Republic of Congo and pits hunter against poacher in a deadly and decidedly one-sided battle.

Fletcher Reynolds conducts hunting safaris for his rich clients, taking them out so that they can bag themselves a trophy to take home and stick on their walls to boast about over drinks. One of the biggest threats to his business are illegal poachers who come and take animals from his property. Legally, under Zimbabwe law, he has the right to shoot any unauthorised trespasser carrying a weapon under the assumption that the person is poaching. So in order to detect any trespassers onto his property he hires former Special Forces soldier Shane Castle as his new head of security.

Castle has come fresh from a tour of duty in Iraq where he was working in the Australian army as part of the peacekeeping force. He's battle-hardened, highly skilled in tracking and more than capable at detecting and locating poachers. He was born in Zimbabwe although he grew up in Western Australia and has dreams one day of buying his own piece of land in the country of his birth. For him, this is just another job that will help him reach that goal.

Providing a romantic interest to the story as well as introducing a conservationist angle is zoological researcher Michelle Parker who, probably against her better judgement, falls for the charms of Fletcher Reynolds. Parker is in Africa to study the wild African dogs, one of the many species of animals that has become endangered due to man's influence. A conservationist dating a hunter - it provides an interesting mix and allows Park to subtly include the odd informative narrative to illustrate the points of view of both arguments without interrupting the flow of the story.

The hunting business seems like the ideal set up, hunters fly in and head off on their safaris with Fletcher while Shane and his men patrol the property to ensure the poachers aren't making off with the game. But there is one aspect to all of this that is a little concerning to Castle. There seems to be an awfully high percentage of the encounters with poachers that end up in a gun battle with Fletcher leading his clients towards the confrontation instead of away.

The frequency of the encounters, the growing death toll, the mounting danger towards he and his men and the unsavoury characters in the hunting parties set Castle's antennae to twitching. The intensity of the story begins to build as Shane is forced to start looking into Reynolds' activities. What he finds after a little digging is far more serious than he ever could have imagined and he can see his chances for realising his dreams rapidly evaporating.

There's more to Tony Park's novels than the ragingly intense pressure sparked by his freely flowing style. He also highlights the reality of the difficulties facing the inhabitants of Zimbabwe with many people having lost their jobs during the political turmoil that has wracked the country. Punctuated at regular intervals within the story are also some interesting documentary-style asides that deliver insightful and informative snippets about some of the animals that inhabit the continent giving the book a much wider appeal that simply being a balls-out action thriller.

Safari is a story that moves along briskly reaching mini-peaks each time a group of poachers is encountered which leads to key moments of frenetic activity. These skirmishes take place at (some might say alarmingly) regular intervals and soon become significant pieces of a puzzle that Shane is required to put together as the story enters the dramatic concluding stages.

The character relationships within the story play a big part towards its believability and Tony Park has given each of the principals a strong background and then keeps them true to type. He doesn't go overboard in getting into their minds too deeply, but I still felt that I knew exactly what their driving motivations were which gave their actions credibility.