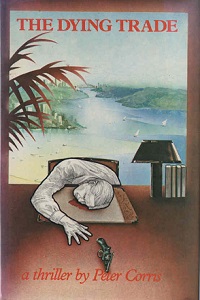 "The villain was in custody as they say, but villains were coming out of the woodwork and the past was sending out tentacles which were winding around the necks of people living and dying in the present. It’s a dying trade I’m in."

When the wealthy Bryn Gutteridge hires Hardy to help his sister, it looks as if blackmail is the problem. Until the case becomes more brutal, twisted and shocking than even Hardy could have guessed.

We meet Cliff Hardy in the exact spot from where all private detectives worth their salt should be introduced, behind his shabby desk in his shabby office. The Dying Trade introduces us to a tough private enquiry agent, an ex-boxer with a no-nonsense attitude, a cynical outlook on life and his surrounding city of Sydney and healthy dislike for fools in power. Peter Corris wastes no time in painting him as the typical hard drinking, chain smoking hard head waiting for clients to come knocking down his door.

In this case no-one walks into his office, instead the phone rings and he is summonsed to the home of Bryn Gutteridge at Vaucluse, one of Sydney’s most exclusive addresses. Gutteridge wants to hire Cliff because his sister, Susan, has been receiving threatening phone calls and letters, harassing her so completely that she has checked herself into a clinic where she is undergoing treatment to deal with the shock. It sounds like a simple job for Cliff - find the source of the harassment and report back to Gutteridge.

As anyone who has read a Cliff Hardy novel will know, though, the seeming simplicity of the original job is usually in direct inverse proportion to the complexity with which it eventually plays out. By simply tracking down Gutteridge’s sister and stepmother, Cliff’s investigation explodes in two momentous ways. The first of these comes when he intercedes in a domestic dispute between Ailsa Sleeman (Bryn and Susan Gutteridge’s stepmother) and her toy boy, chucking the bloke in the backyard swimming pool. The second comes when he shows up at the Longueville clinic to see Susan, confronts the clinic’s owner, Dr Ian Brave, pushing his weight around and getting himself knocked out for the first time in the series.

By the time he scrapes himself up and makes it home nursing the first impressions he has made, Bryn Gutteridge rings to call him off the case in fear for his life. Hard on the heels of this setback comes a call from Ailsa Sleeman - she now wants to hire Hardy after an attempt is made on her life. Hardy’s activities have caused a chain reaction within the Gutteridge family and Cliff is now well and truly roped into it.

What follows is a case that grows in complexity as family secrets are unearthed and picked apart revealing the kind of intrigue that threatens to rip it completely apart. Fortunately with Cliff Hardy’s sharp mind complemented by an even sharper tongue we are guided through a mystery that culminates in the most amazing (and unexpected) ending.

The Dying Trade is not merely a significant book because it is the first in a series that will grow to 30 strong. It also contains a well-constructed mystery that twists first in one direction before almost inexplicably taking off in another, drawing together apparently unrelated scraps into a deviously lurid family drama.

The plotting of the book is tight and the narrative is terse, coming from the mouth of Hardy with a cynical and sometimes harsh delivery. Hardy thrives on confrontation and as a result the story moves from phase to phase very rapidly as the detective mows down each lead, agilely clicking the pieces of the case into place. It’s up to the reader to keep up and make the necessary connections as Hardy uncovers them.

Because the story has opened with Hardy sitting alone in his dismal office, you get the impression that he is a bit of a loner, a tragic detective with a bottom-drawer drinking problem and a bleak, directionless existence. With the possible exception of the drinking bit, Hardy belies these first impressions with an impressive array of friends and contacts who always seem happy to oblige him when he turns to them for favours. There is a magnetic appeal to the man, an ineffable charm that he occasionally uses when brute force doesn’t work.

This is a surprisingly complex and rather sticky first investigation which makes The Dying Trade a memorable series opener. However I think it’s the unflappable nature of Cliff Hardy that has drawn crime fiction fans back time and again.