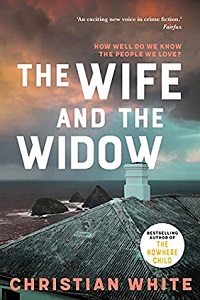 Set against the backdrop of an eerie island town in the dead of winter, The Wife and The Widow is an unsettling thriller told from two perspectives: Kate, a widow whose grief is compounded by what she learns about her dead husband’s secret life; and Abby, an island local whose world is turned upside when she’s forced to confront the evidence of her husband’s guilt. But nothing on this island is quite as it seems, and only when these women come together can they discover the whole story about the men in their lives.

Brilliant and beguiling, The Wife and The Widow takes you to a cliff edge and asks the question: how well do we really know the people we love?

This is an extremely atmospheric story that embraces the uninviting chill of winter on the small fictional island of Belport in Bass Strait off Victoria’s Bellarine Peninsula. The island is in the off-season and devoid of the tourist horde leaving it quiet and desolate.

The story is told from alternating perspectives of two women whose fates are foretold by the title of the book. However, neither fate is a happy one.

The book’s title clues you in fairly heavily that at some point the two women will cross paths. They do…but certainly not in the way I was expecting.

Kate Keddie waits at the airport with her young daughter in the expectation that John, her husband, will be walking through the Arrivals doors after a working trip to London. When he doesn’t appear the first sense of unease ripples through her body. The second jolt hits after she calls his office only to find out he hasn’t worked with the company for a couple of months. She soon learns she didn’t quite know her husband as well as she thought.

Abby Gilpin lives on the island of Belport with her husband and 2 teenage kids. Her story is told at a slower pace as she appears to be living the ideal, normal life even if it may appear to be boring - and if you discount the fact that she's an amateur taxidermist. She does unearth a few unsettling snippets about her husband that has her doubting him.

The plot…yeah, we’re not going to reveal too much about that here apart from the basics.

A man is murdered on the island of Belport. The police have little to go on in the way of suspects or evidence.

Already on the island are Kate and her father-in-law Fisher. They’re there because the security alarm in their holiday home had been triggered. They believe it must have been John who has come to the island to take some time for himself.

They’re unprepared for the phone call from the police asking them to come down to identify a body.

Wrapped up in her grief and confusion, Kate picks up on a few pieces of information that just don’t sit right and commences her own investigation. She begins to put together snippets of information that leads her to believe she has an idea about who might have killed her husband.

This is one very impressive thriller. The atmosphere is dark and oppressive, fuelled by the winter off-season which has left the island half-deserted and quiet. The bitter weather adds to a constant feel of menace that hangs over every scene.

White is very good at creating vivid imagery with a commendable turn of phrase:

"The waves and salty air had stained the walls of the building pale green, and its roof was Jackson Pollocked with bird shit.”

We develop a full understanding of the motivations and human frailties of each of the characters which become very important as the story progresses.

There is a great deal to like about The Wife and The Widow. It is atmospheric, broodingly dark and, at times, achingly insightful.

Above all, it was a completely engaging story that drives the reader on through to the end. I thought it was a very worthy winner of the 2020 Ned Kelly Award for Best Crime Novel.

'The author does a vivid job of creating real characters and captures the alternately calm and claustrophobic feeling of island life. Some readers will find the twists fair and others, infuriating, but no doubt all will hang on to discover the ending.’ (Kirkus Reviews)

'White delivers a shocking, excellently executed twist that will have readers reexamining their assumptions; this and the sordid details of decades-old misery and fierce parental love make The Wife and the Widow a story to remember. Fans of White’s debut will be pleased with this follow-up. (Booklist)