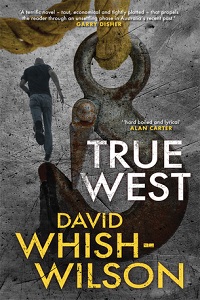 Western Australia, 1988. After betraying the Knights bikie gang, 17-year-old Lee Southern flees to the city with nothing left to lose.

Working as a rogue tow truck driver in Perth, he is captured by right-wing extremists whose combination of seduction and blackmail keeps him on the wrong side of the law and under their control.

As the true nature of what drives his captors unfolds, Lee becomes an unwilling participant in a breathtakingly ambitious plot – and a cold-blooded crime that will show just how much he, and everyone else, still has to lose.

True West is a classic case of out of the frying pan and into the fire.

When the story opens 17 year old Lee Southern is heading for Perth after betraying the Knights, the bikie gang he has been associated with his whole life. He believes his father, former head of the bikie gang, to be dead and his decision to torch their marijuana crop is not going to go down well.

He travels to Perth in a tow-truck and this gives him the chance to earn some cash upon arrival as a freelance operator.

His problems in Perth begin when an established tow-truck company, True West Towing, takes exception to his move on their territory. He is beaten unconscious and taken to their headquarters.

True West is actually a front for a right-wing group who call themselves the Australian Patriotic Movement. The head honcho recognises Lee and his ties to the Knights and forces him to work with the group.

What follows is a dizzying ride of drugs, armed robbery, racist attacks and mental disintegration.

Fast developing a dependency for the heroin that is in constant supply and a liking for the armed hold-ups he is coerced into taking part of, there is a chance he could become morally lost.

“Lee was still thinking about Brad’s question, and what he believed in.

No good answer to that question.

He kept picturing his father, in his isolation cell, coming off the gear. The suffering and desperation.

Lee always believed what his father believed, but now he wasn’t sure what that was.”

It seems that it is only the disgust at the racist beliefs of the members of the APM that will steer him on anything resembling a righteous path. That and the safety of his father who is at the mercy of the neo-Nazis as he sits in prison.

True West is set in the 1980s and effortlessly provides the reader with a clear sense of the political climate at the time.

Drug use is on the increase and xenophobia is an issue that has come to the forefront of the consciousness of the people living in the most remote capital city in the world.

The story flows along at a steady pace as Lee tries to make sense of his predicament and figure out a way to get out of it. The action really ramps up when he becomes more trusted within the APM and begins to operate with increasing freedom.

This is a tough, hard-eyed look at some pretty grim themes and it is handled with a deft hand. As a lead character Lee comes across as a likable yet deeply fallible guy who is prone to making mistakes. In other words, you’re invested enough to care about him.

True West is set in Western Australia in 1988, the time when Jack van Tongeren’s Australian Nationalist Movement (ANM) was papering the city with hundreds of thousands of racist posters, and when John Howard and Ian Sinclair were calling for a reduction in Asian immigration. True West ’s protagonist, seventeen-year-old Lee Southern, is on the run from the Knights, a Geraldton-based bikie gang whose marijuana plantation he torched in retaliation for his father’s murder. Southern tries to set himself up in business in Perth as a rogue tow-truck driver, listening in on police radio for reports of accidents in the hope of getting there first. He falls foul of drivers from True West Towing. - Visit Australian Book Review

Using former WA neo-Nazi group Australian Nationalist Movement leader Jack van Tongeren’s memoirs as part of his research into this dark 1980s era, the Curtin University creative writing lecturer said he chose to write novels set in the recent past because the resonances of these periods were clearly visible today.

“It has been a sad thing to observe, worldwide, the rise over the past decade in particular of various strains of far-right extremism, and how in some countries these views have been incorporated into government policy as a way of garnering votes,” Whish-Wilson said. - Read full article here