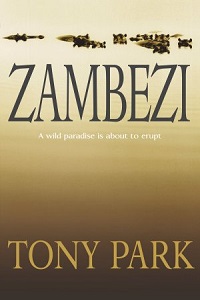 News of the death of a young research assistant, reportedly killed by a man-eating lion in Zimbabwe reaches those closest to her. Jed Banks, a Special Forces soldier serving in Afchanistan; Professor Christine Wallis, a wildlife researcher in South Africa; and Hassan bin Zayid, a hotel magnate in Zambia. The victim was respectively their daughter, protegee and lover.

Driven to find out exactly what happened, Jed, accompanied by Christine, travels to the banks of the Zambezi to investigate. Not only does Jed learn some shocking truths about the daughter he thought he knew, but he begins to suspect that Christine is withholding crucial information. Meanwhile, Hassan's grief is dangerously volatile.

The magnificence and terror of Africa is the backdrop to this superb successor to the best-selling Far Horizon.

The wilds of Africa are again the scene of Tony Park's second novel, Zambezi a thriller that takes us to some of the most wondrously majestic countryside on the continent. Throughout, though is the constant reminder that it is also filled with a wide variety of dangers, too. Zambezi takes place in the neighbouring countries of Zimbabwe and Zambia highlighting both troubled nations, the dangerous wildlife and the difficulties outsiders have in moving around the country.

Special Forces Master Sergeant Jed Banks has just finished his final tour of duty in Afghanistan when he hears the news that his daughter Miranda is dead, having been attacked and killed by a man-eating lion while working in Zimbabwe. The news is devastating but he finds it difficult to come to terms with the reality of the situation and so makes it his mission to travel to Africa to the Zambezi River Valley to find out exactly what happened to his daughter. He's after some concrete evidence of her fate to help come to terms with the loss.

When he reaches Zimbabwe he is struck by the impression that there's more going on than he has originally been led to believe. Actually, it all started back in Washington DC when an old colleague calls him with a warning to stay away from Africa, but wouldn't elaborate on why. Then he notices an increased interest in his movements, particularly at the airport when clearing customs and passing through secure checkpoints.

The clincher comes in an encounter with an intruder in his Zimbabwe hotel room which results in something being left in his room rather than belongings being taken like in a normal robbery. What is it about his daughter's death that has drawn such a defensive reaction from people who obviously have a lot of pull.

Jed is burning with anger which he directs at Miranda's supervising professor Christine Wallis who he blames for allowing his daughter to go into such dangerous territory alone. When they meet his anger is further fuelled by what he feels is an unreasonable evasiveness on her part that hampers his mission to learn the full details of his daughter's fate.

But Christine Wallis is a beautiful woman and Jed banks is a single man and dead daughter or no it seems that in these sorts of novels nature is always destined to run its course to provide a manufactured kind of romantic interlude. It doesn't take a genius to figure out as early as the first fiery encounter that their relationship is going to lead to sexual tension, mutual attraction, blah de blah. Just once I'd like to be surprised by a more realistic outcome when a man and a woman are thrown together in a common undertaking.

Tony Park has an enviable ability to capture the essence of the African landscape and deliver it in such a way that it comes impressively alive on the page. With clever use of the local guide to point out important details, dangers and customs we gain a solid understanding of the way the wildlife and local inhabitants coexist in the dusty plains and dense jungles in which the story is set.

Zambezi is slow to build after an initial flurry in Afghanistan to establish Jed's credentials as a battle-hardened soldier. Travelling through Zimbabwe, meeting with locals and encountering various hurdles and stumbling blocks is merely a prelude to a resounding crescendo that takes place in Zambia and on the Zambezi River itself.

Zambezi showcases a part of the world that is rarely visited due to the geographical isolation of the place combined with political uncertainty which makes it more than your normal thriller. Tony Park makes good use of the modern day threat of terrorism to give it its relevance in today's society and then inserts the story into the exotic wilds of Africa. Chuck in some sexual tension and a local expert who can inform us about some of the more fascinating aspects of the local wildlife and you've got a book that fairly races along.

The inescapable message that comes out of Zambezi is that, even though we are in a continent filled with all sorts of dangerous animals such as lions, hippos and crocodiles, the most dangerous animal of all walks on 2 legs.