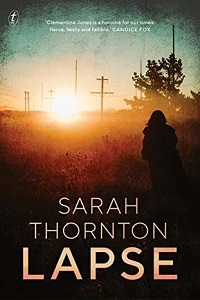 All it took was a lapse…a momentary lapse…to bring Clementine Jones’ world crashing down. Now she’s living like a hermit in small-town Katinga, coaching the local footy club. She’s supposed to be lying low, but here she is, with her team on the cusp of their first premiership in fifty years—and the whole bloody town counting on her, cheering her on.

So why the hell would her star player quit on the eve of the finals?

It’s a question she wishes she’d left alone. Others are starting to ask questions too—questions about her. Clem’s not the only one with a secret, and as tension builds, the dark violence just below the town’s surface threatens to erupt. Pretty soon there’ll be nowhere left for Clem to hide.

Lapse is the debut novel by Sarah Thornton and exhibits all of the hallmarks of the classic amateur sleuth with some very Australian additions. It’s set in a small country town in Victoria where the Aussie Rules team is forefront on just about everyone’s mind. But there’s something rotten going on in Katinga and it will have devastating effects on the majority of town.

The Katinga Cats are on their way to the finals for the first time in many years and it is all due to the coaching skills of Clementine Jones. She’s new to town but has an innate ability to coach Aussie Rules.

But when the team’s star player reveals that he is dropping out of the team due to family issues, Clem is at first supportive but later realises he has made the story up. She wants to find out what is going on, why he’s dropping out and who stands to benefit from his departure.

She begins to investigate and that means delving into the private lives of some of the movers and shakers of the town. It also means raising her own profile, something that is clearly not part of her plan.

“Clementine’s smile faded. Holed up in the hills, she’d stuck to the plan, never going anywhere or doing anything that wasn’t mandatory – certainly not hanging around chatting in car parks like these country folk seemed so keen on.”

Immediately we are alerted to the fact that she doesn’t consider herself one of them. She’s from the city and she appears to be hiding out.

This turns into an intriguing story of unanswered questions, closely held secrets and powerful people willing to use extreme violence to protect their lies.

Lapse is a fast moving debut novel that introduces a fresh and bold character in the form of Clementine Jones. At times it as though she took the in-your-face confronting style a little too far so that it jarred to my ear. And while her questioning technique was sloppy, it certainly produced results and that meant the story quickly unfolded.

Key to the success of the book is the ability of Sarah Thornton to adroitly evoke the small country town in which the story is set. The dialogue used by the characters is spot on and there is a familiarity to the machinations of the community.

This is a thoroughly entertaining rural mystery providing a solid foundation upon which further books will be firmly based.