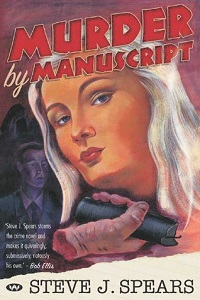 All internationally renowned 'lady showbiz detective' Stella Pentangeli wants is to solve a simple literary riddle: did William Shakespeare belong to a blood-thirsty seventeenth-century cult which resurrected dead people? All enigmatic and brilliant Investigator Ng wants is to find out why a relentless monster is using Shakespeare's personal recipe to make 'resurrection soup' out of twenty-first-century citizens.

As the body count mounts, all the serial killer wants is to add Stella and Ng to the menu.

Murder by Manuscript is the second book in Steve J. Spears' Pentangeli Papers, picking up from where Murder At the Fortnight left off. It is a darkly humorous thriller that throws together an intuitive amateur detective named Stella Pentangeli with a brilliant, though humorless Chinese-Australian detective, referred only as Inspector Ng. The pair met during The Murder At the Fortnight and ever since have endured a relationship that is completely filled to the brim with unfulfilled sexual tension.
A serial killer on the loose, with his work distinguished by the gruesome signature of the removal of a different body part of each of his victims. Not the usual scenario for what is a predominantly humorous thriller.

Charged with the job of investigating the first murder is the remarkable Inspector Ng, Unconventional in style but with the most successful clearance rate in the force, Ng sees himself as the voice for the dead and goes about his work with a sense of outrage on behalf of the victim. He is an absolute delight to watch operate and he is always at least 2 or 3 steps ahead of everyone else.

Stella Pentangeli is the editor of the on-line entertainment magazine, is a pretty good amateur detective and is secretly in love with Inspector Ng. Her notoriety from the events of Murder At the Fortnight has prompted Brother Magdalene to seek her out. He has in his possession a fragment of what could possibly be a genuine lost work of William Shakespeare. If it is authentic then it suggests that Shakespeare was a member of a satanic cult who attempted to reincarnate the dead.

One murder soon becomes two, each distinguished as being the work of a single killer by the fact that certain body parts had been souvenired from each victim. A quick check with the newly discovered scrap suggests that the body parts match the details of the reincarnation recipe and there would be more parts to collect, hence more murders to come.

Spears does an excellent job of keeping a consistently lively pace to the story by zeroing in on the quietly amusing unorthodoxy displayed by Inspector Ng. His methods are just unusual enough to make them delightfully entertaining. He also has a most amusing habit of turning his detractors, of which there are many within the police force, around to be his greatest fans. It seems that the "Legend of Ng" is going to continue to grow throughout the series.

But let us not forget the main theme of the story and the disturbing questions that have been raised. Is there a darkly sinister and up until now unknown side to William Shakespeare? Is someone really following the "recipe" on the recovered scrap of paper? How far will the killings go in the name of reincarnation? And, most importantly, will Ng and Stella ever get to tell each other how they really feel about one another? Tantalizing questions, to be sure.

The answers make for a very enjoyable comic thriller and an outstanding follow-up to The Murder At the Fortnight. It should be mentioned as a warning though that it is recommended that the first book in the series be read by way of introducing the characters a little more fully. Although a brief summary of what has gone before is offered, the full history of Ng and Stella's relationship is better appreciated by reading about it firsthand.

Murder By Manuscript is part spine-tingling thriller part humorous parody of the Australian police force but fully entertaining for anyone who enjoys their comedy on the dark side and their characters on the quirky side.