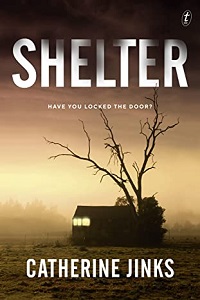 Meg lives alone: a little place in the bush outside town. A perfect place to hide. That’s one of the reasons she offers to shelter Nerine, who’s escaping a violent ex. The other is that Meg knows what it’s like to live with an abusive partner.

Nerine is jumpy and her two little girls are frightened. It tells Meg all she needs to know where they’ve come from, and she’s not all that surprised when Nerine asks her to get hold of a gun. But she knows it’s unnecessary. They’re safe now.

Then she starts to wonder about some little things. A disturbed flyscreen. A tune playing on her windchimes. Has Nerine’s ex tracked them down? Has Meg’s husband turned up to torment her some more?

By the time she finds out, it’ll be too late to do anything but run for her life.

Shelter is a suspense thriller centred around the pall of domestic violence and the need for victims to escape their abusive partners.

The story opens with a night time handover of a woman, Nerine, and her two children into the care of Meg, another victim of an abusive relationship.

Right from the very start the stress felt by Nerine and her older daughter, Ana, is palpable. Jumping at shadows and the slightest unexpected noise is the norm and this puts everybody, Meg included, on tenterhooks.

From the moment they set foot on Meg’s remote property Nerine’s fears manipulate Meg onto an increasingly dangerous path. When the fears progress into something more disturbing, that’s when events really spiral out of control.

Through Meg, we are given a comprehensive breakdown of the many different ways an abusive husband can exert his control over his wife. And we’re not talking about physical violence here. The constant controlling, belittling and derisive comments that slowly wears away at the confidence has a long-lasting effect on the mind.

This, I think, plays an important part in Meg’s responses to the behaviour of Nerine and her two daughters.

I thought this was a finely constructed suspense novel that moves along crisply with a tension level that was constantly bubbling away on an increasing heat. It led us in one direction, playing cleverly on our preconceived sympathies about who the victim is only to hit us with one body blow after the other.

Shelter is an absorbing dramatic thriller that provides sobering insights into the harrowing world of the domestic violence victim.